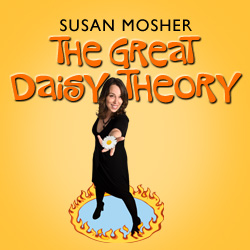 Susan Mosher's critically acclaimed solo show, The Great Daisy Theory, has played to sold out audiences iand returns in 2019.  In this hilarious & heartfelt musical memoir, Mosher recounts growing up in the sexually experimental suburbs of 1970's Southern California, bouncing between divorced parents. Bearing witness to her mother's alcoholism and her father’s immersion in the hippie movement, she finds her escape in the musical theater and dreams of life upon the Broadway stage. With music ranging from Camelot to Coldplay, Mosher tells her personal tale with rare emotional candor, highlighted by her signature off-the-wall humor.  Musical arrangements by John Boswell (THE SECRET GARDEN), American Idol’s Michael Orland, Mark Hartman (SONDHEIM ON SONDHEIM, AVENUE Q) & Ray Fellman (I PREFER TO DREAM).

"The Great Daisy Theory is a delightful, entertaining, and sometimes somber piece of theatre, packaged in an hour." -- nytheatre.com

"In this terrific autobiographical evening of unquiet desperation, the warm, funny, biting, ferociously committed singer-actor—she replaced Jackie Hoffman in Hairspray, and is half of the cult pseudolounge duo Cashino—turns the Beechman basement into a Mosher pit." -- TimeOut NY

"The word that comes to mind after attending Susan Mosher’s captivating, autobiographical, musical roller coaster of a show is “Torrential.” It’s a refreshing thunderstorm, full of lightning, perfect for a hot August night.” -- NY Press 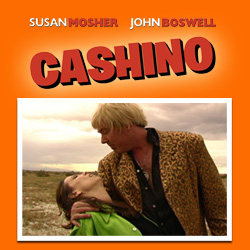 CASHINO stars Johnny Niagra (John Boswell) and Pepper Cole (Susan Mosher) met in Chula Vista, CA in the early 80's and have been making their own special brand of music together ever since. After heavy drama in Las Vegas nearly destroyed the duo, Johnny & Pepper set out to make a comeback as internet entreprenuers, starting an online gaming site, CASHINO, where they hire themselves out to entertain people “Las Vegas style” while they gamble online in their home or office.  A documentary film was made and a multimedia show about Johnny & Pepper's quest for success was born.  After gaining cult status with LA audiences, CASHINO played to sold out houses in NYC and three sequels to the original CASHINO were created, featuring cameos from Peter Facinelli, Tiffani Thiessen, Jenny McCarthy, Henry Winkler, Will Ferrell & more!

"The most energized and hilarious musical time capsule to be found in the city. (Mosher) has the pipes of Patti Lupone, the comic wherewithal of Carol Burnett... she not so much lights up the stage with Pepper as she ignites a blazing basement fire that transfixes the crowd. It’s a bravura performance. ” -- NY Press

"Mosher is a dynamo of bright, unstable energy; her herky-jerky side kicks while singing are like steam being released from a pipe on the verge of exploding. If Cashino is a disease, baby, I don’t want the cure. Catch it if you can.” -- TimeOut NY